All about the PineTab (Update) 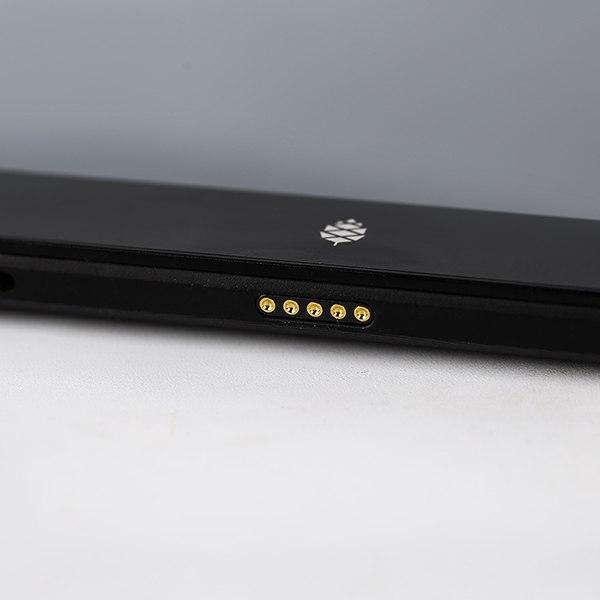 This is a supplementary post to this month’s Community Update – if you haven’t read this month’s news, then I suggest you go back and have a read since we’ve had a handful of interesting announcements. Regarding the PineTab, I am happy to let you know that production is well under way and we are mostly on schedule with the manufacturing and shipping processes. To be precise, we are just a week behind the original schedule; the cause of the delay is our decision to change the LCD panel driver (or perhaps more accurately, we were convinced to exchange the panel driver by the vendor) as the driver we originally chose is reaching end of life (EoL). We ultimately decided that a week’s delay is worth it. The alternative scenario would likely result in developers supporting multiple LCD drivers in their operating systems, which is not ideal.

Here are the details of the current timeline. Finished PCBAs will be released to us from the factory on the 27th and, granted we’re happy with them, fully assembled tablets should be dispatched from the production line on August 6th or 7th. The PineTabs will make their way to Hong Kong soon after and I expect that shipping will commence the week of August 17-21. Closer to the shipping date, sometime early next month, I’ll open a shipping thread on the forum which you’ll be able to follow.

I am also pleased to announce that CE, FCC and RoHS certifications for the PineTab have already been finalized and the reports are now being written up. All reports will be completed in time for shipping and relevant certificates will be submitted to Wiki as soon as they are made available to us.

As I mentioned in the past, we have significantly improved the battery from earlier hardware iterations. The PineTab ships with a 6000mAh Cobalt in lithium-ion battery, which not only provides a long battery life for the tablet but also superior discharge-cycle battery longevity. Investing into core components such as the battery is part of our commitment to seeing it adopted in both private and corporate (e.g. point of sale) environments, where it will be used for multiple years. We have also received PineTab m.2 LTE/SSD and LoRa adapter samples from vendor partners. Before these become available in the PINE Store we want developers to give them a proper spin so that all necessary functionality these adapters provide can be enabled in software. I presently cannot tell you when they will be available for purchase in the PINE Store, but I suspect that the m.2 LTE/SSD adapter will be the first to become available in the next 2-3 months time.

Lastly, UBports developers have been working hard on getting the Ubuntu Touch build for the PineTab ready. Software progress made on the PinePhone has also directly contributed many features to PineTab’s functionality. Among others, the operating system now supports Over the Air (OTA) updates and real convergence, which allows you to switch between tablet and desktop mode on the fly when the keyboard is attached. Despite the software still being a work-in-progress, the experience of transitioning between one input state and the other already feels very good, and it will only get better from here. I hope that many of you who will be getting these early units will want to contribute to the development process by submitting reports, testing and helping resolve issues.

41 responses to “All about the PineTab (Update)”

Do you have any estimates of when you will be accepting orders for the next batch of PineTabs? I was one of the people who didn’t get notified when ordering opened up for the first batch.

Ken, nobody I know of was notified with the early adopter batch. We watched the Pine Store, the Pine64 forum, and Twiiter for news of it being available. But there wasn’t a notification system in place.

They stated after the early adopter batch sold out that they got hung up with a website move and some other things and just “forgot” about sending out the notices to all of us who registered to be notified. I read a news article from engadget or some similar site saying that they were now available for order. I immediately went to the site to order but they were already sold out.

I understand that things like this can happen but I hope that we will get a chance to order from the next batch.

Do what I did and watch the store and forums every day from after the first batch of PineTabs are shipped.

When it will be available for india?

When it will be available for india ? Please make it possible.. I am so much excited.

Thanks for update! I have a question regarding “real convergence” which you mentioned (switching between tablet and desktop mode when the keyboard is attached) – do you happen to know if it affects only accompanying Pine-provided keyboard-which-doubles-as-a-screen-cover, or any USB keyboard, or bluetooth keyboards, too?

I assume that it will be possible for user to control this behaviour, so one will be able to casually browse with a tablet on their lap, having a keyboard laying nearby for the case one needs to type a sentence longer than a few words.

I don’t know this for certain but I accept that the answer is ‘Yes’, given that the PineTab pogo-ping are USB 2.0

will be possible to install Android? I need to use the Lego Boost app on a good Tablet like this one!

Thank you for the thorough update, Lukasz. I can’t wait until shipping starts!

Very interested in the Pine Tab, and would love to see an E-Ink Pine E-book reader in the future!

That wouldn’t be such a bad idea for a future product. A lot of the e-ink ereaders run linux already, so it’s certainly not a improbable option. A big part of the decision making would have to be ‘can you practically use an e-ink screen device running linux for anything else?’ and if the answer is yes, and there is a sufficient market, then it could very well happen! I think it would be similar to the pinetime… a product that could be unexpectely popular, if the diy/tinkerer/hacker community got behind it 😉

Re: “can you practically use an e-ink screen device running linux for anything else?” – I have an idea of a wall-mounted time/weather info screen. Probably e-ink would make much more sense than a conventional always-glowing screen, given that screen should update only time once a minute, and everything else – about 60 times less often. So a e-ink powered battery-less Pine tablet sounds like a proper device for this!

show me a working linux on e-ink reader? xiaomi? inbook ? no not working. some emulators on android.

but screen e-ink is ugly ok. Why not mirasol or PixelQ (normal grayscale , sun friendly screen)?

Most (all?) the Kindle eink devices? Kobo? Pretty much every device except those that run Android…

+1
Would love that too.
Higher resolution eink with better screen to body proportion please.
Also 10″ not smaler.

e-ink is sloooowly, mirasol or oit technologi can show movie in normal speed.
no e-ink are not a answer

Epaper displays improved a lot in the last few years. I’d say that the refresh rate isn’t that much of a problem anymore (devices like Dasung Paperlike 3 HD proof this..).
Also colors are now possible. So maybe in two years we can have a nice GNU/Linux tablet with a colored epaper display?

color are NOT possible now the best ereader have one color pixel for 9 grey pixel.
color are not wide (very light) sorry this is not faster. Count how fast are Your console in linux and e-ink and type cat program for 7-10 pages.

I totally agree, a PineInk device would be very nice! And maybe a e-ink replacement screen for the Pinephone would be an option too.

I love the communication around your products. Even announcing delays feels good. Thanks for the frank updates.

Hope there will be a future version with a higher resolution screen. I currently use a Chrome tablet for accessing CAD drawings (in PDF prints). It sucks! Horrible file browser, frequently dropped wifi connection — which then makes all open PDF files dissapear, too much info is pumped through Google servers, even local DNS gateway doesn’t work — I have to use Google’s, on and on…

This would be a great device for your 3GB ram modules if you can get more of them….

Very keen for the batch becoming available to order! I missed the first round.

Also, Lukasz, the font on you blog posts is very feint, and it’s a a very light-grey on white background, which I find quite difficult to read comfortably. Can I recommend just using full black for the font?

—-
folding ethernet socket, please add this for laptop or tablet

You should be an USB – Ethernet adapter
https://www.raidsonic.de/products/adapter_multidocking/network_adapter/index_de.php?we_objectID=5707
But it is limited to USB2.0 😉
Greetz

Any update on the Pine Tab?

Lucasz wrote:
Finished PCBAs will be released to us from the factory on the 27th and, granted we’re happy with them, fully assembled tablets should be dispatched from the production line on August 6th or 7th. The PineTabs will make their way to Hong Kong soon after and I expect that shipping will commence the week of August 17-21.

Did the fully assembled tablets get dispatched from the production line on Aug 6th or 7th? Will they commence shipping the week of August 17-21?

No news = goods news?
Lucasz:
please write an update; there is no need for long sentences with 500 words including.
Just something like, e.g.:
#####
PINETAB Update
Parts are produced and delivery to assembly: 28th Juli
Assembling has started on: 2nd, still in production
Awaiting dispatching from China to HongKong on 15th August
….
#####
Thats all we need 😉
Create a newsblog as short as possible! (that’s my opinion, may not be the opinion of the rest of the world!)
Regardes

Just got confirmation from DHL that my pinetab is in routeroute!

I was one that ordered from the early adopter first run, I haven’t received anything telling about when the tablet and KB will or has shipped to me. Is my order lost? or have they not started shipping yet? The Dearth of information is disconcerting..

You should get shipping information when it is dispatched. I had ordered a PinePhone and I got notified on dispatch.

I have also also ordered a PineTab so I’m in the same situation as you, The last update informed us about possible delays, so I’m not worried, it is expected and I’m ok with it.
I always remember that this is a very small and pioneering company, shipping early development devices, doing a great service to the Open Source & Linux community and I’m happy to support them while they are getting more experience 🙂

hope this question is not too stupid to ask — does the pinetab accept sim cards or whatever hardware is necessary to connect to a cell carriers 4g LTE network? or 5g? not a techie, but i’ve been using linux (mostly ubuntu and derivatives) since 2007.

I think it needs 4gb version for making practical multi tasking work out of it.

Hi can this boot android ?

I’ll bite-where’s my SD slot? If it’s there, it’s well hidden. Even though I have an early adopter, it doesn’t seem unreasonable to have all the ports.

Hello. I would like to know if you will make new pintab tablets. I have a pinephone 🙂