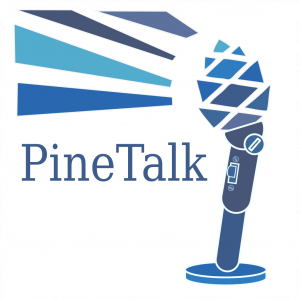 Send in your questions!

A community ran podcast for the community.

Join the PineTalk chat on the official PINE64 Discord server.

Music from Bensound.com and Zed (@itismezed)

In the thirteen episode Peter and Ezra discuss the PINE64 July Community Update and go through more Community Questions than ever before! There’s also something fun and it ends with a bang!

In the twelfth episode Ezra and Peter discuss some Community news and interview content creator RTP, who is all about privacy and security. They also discuss (your) community feedback and questions!

In this eleventh episode Ezra and Peter discuss the June Community Update and interview content creator Linux Lounge and they also discuss (your) community feedback and questions!

Episode 10: Man of Many Apps

In the first 2-digit episode of PineTalk, Ezra and Peter are happy to interview Martijn Braam, whom you may know of his involvement with postmarketOS, the many apps he develops or his videos and blog posts. They also present some homework and discuss community feedback and questions!

In the this episode Peter and Ezra discuss two conferences that happened recently, the May PINE64 Community Update and some more community news. They also answer four community questions and ask kindly for more!

In the seventh episode of PineTalk, a special treat is at the end of the episode: an interview with Danct12, creator of a the Arch Linux ARM spin off for PinePhone and PineTab. Prior to this, Ezra and Peter discuss Feedback, two aspects of the PINE64 April Community Update, and get to answer four (!) PinePhone-centric listener questions as the Beta Edition is starting to arrive in peoples hands.

Episode 6: Pine for You

In this sixth episode, Ezra and Peter talk about the next generation ARM architecture, good news around GTK4 and postmarketOS plus more PINE64 community news. They also discuss a community question (more required!) and “Do you want Linux Phones?” – by Martijn Braam.

In the fifth episode of PineTalk, Ezra and Peter discuss a few aspects of the latest Community Update, PineCube news, the component shortage and answer a few of your questions. BTW: keep getting them coming!

In the fourth episode of PineTalk, Ezra and Peter discuss Matrix video calling on the PinePhone, open source GPUs on RISC-V and go though your Twitter feedback concerning what you’d like to see PINE64 produce next.

In the third episode of the PineTalk, Ezra and Peter discuss the PINE64 February Community Update and answer community questions about Sxmo, RISC-V, and ARM Workstations.

In the second episode of the PineTalk Ezra and Peter talk about to Dalton Durst, Development Manager at UBports, about Ubuntu Touch in general and on the PinePhone more specifically. They also discuss the announcement of the ‘End of Community Editions’ and answer awesome community questions.

In this introductory episode of the PineTalk, Ezra and Peter talk about how they got started with computers, PINE64 and FOSS in general.

Which PINE64 devices are most interesting to the hosts, how did the PinePhone grab their attention and what do they think about the upcoming Quartz64 SBC?

Episode 9: Gaming on Pine64 is a Thing

Zed the editor and Porky explore the world of Linux and Open Source gaming. Porky also talks about why he won’t be getting a Steam Deck afterall…

Episode 8: So Porky Is Now A Developer…

In this Episode Brian and Justin explore the world of Open Source Android and Open Source Nuclear Reactors. And then some real stuff.

Episode 7: Pine in a field, on a mountain, over a river

In this episode Brian and Justin talk in length about the newly announced PINE64 line of audio products.

Episode 6: The Community has been ACTIVE!

In this episode Justin and Brian cover exciting community digs

Episode 5: Talk about a dense 15 minutes

In this episode Justin and Brian chat a bit about the PinePhone keyboard, Plasma Mobile Maui shell and more!

Episode 4: Behind the curtains

In this episode Justin and Brian recorded live on Discord with the stage feature. This episode covers updates for various mobile interfaces, the MNT reform SOQuartz module adapter, the PinePhone malware, the keyboard addon availability, and more!

In this episode Justin and Brian talk about this week’s software improvements coming to PINE64 devices, discuss the keyboard some more, and talk about the future of Mobile Linux.

The first episode of the new Pinetalk show with Brian and Justin! We go into the new structure for the show, such as the introduction of two monthly releases. We’re sure you have feedback for us, and we know there’s lots of room to improve! Stay tuned!

You can also listen on Youtube, LBRY, Peertube Spotify as well as Apple and Google Podcasts.